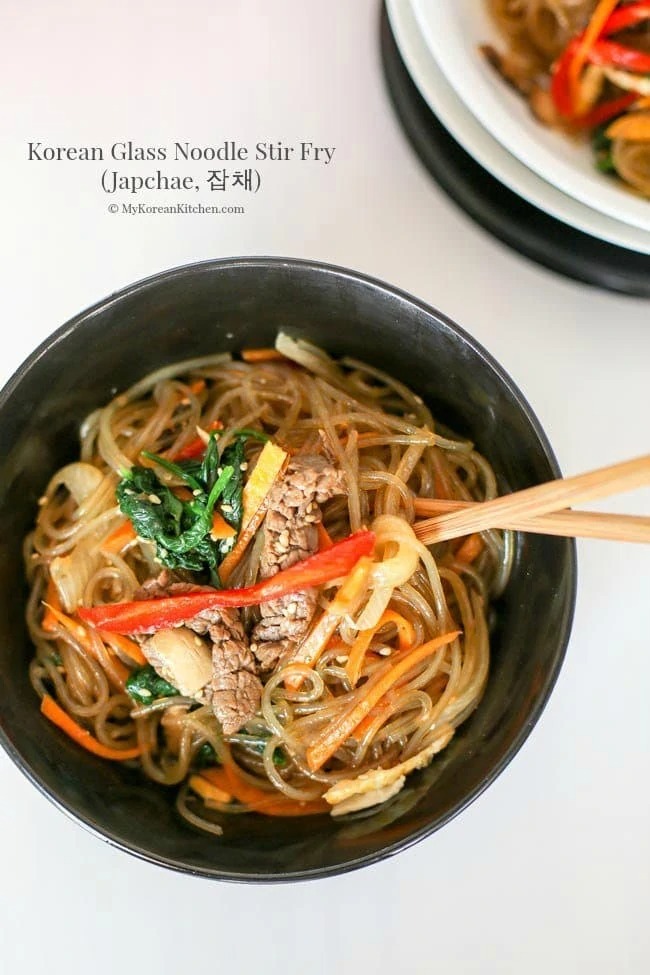 Japchae or chapchae (잡채) is a very popular Korean dish. It is the number one sought after dish particularly during the Korean festive holidays (e.g. New Year’s day and Harvest festival) but it is also enjoyed on any other common day as well.

Japchae translates as mixed vegetables. When it was first invented in the 17th century, japchae was a noodle-less dish.

But nowadays, the main highlight of the dish is glass noodles, which is made from sweet potatoes, along with colorful vegetables and well seasoned meat.

Japchae is typically served as a side dish but it can also be served on a bed of rice (i.e. Japchae-bap, 잡채밥) as a main dish. In this case, I normally serve it with Korean black bean sauce, just like a Korean-Chinese restaurant in Korea. – I will cover that variation at some other time.

Preparing for Japchae is a lot like making bibimbap. It typically requires meat and vegetables (unless you make a vegetarian version) and they are individually prepared and cooked.

Some might argue that this separate cooking process is unnecessary. (I hear you! It’s cumbersome!)

But by cooking them separately you can enhance their individual flavor, texture and color better. (This is really true. I had many mediocre / failed Japchae dishes by stir frying it all at the same time before). After all, they all have a different cooking point.

Well made Japchae should have a balanced sweet and savory flavor, crunchy vegetable texture (not too raw and not too soft) and bouncy noodle texture (not mushy).

And, I’m very happy to share my well made Japchae recipe today! We just couldn’t get enough of it. 🙂 I hope you enjoy my recipe as much as we did!

INGREDIENTS FOR JAPCHAE (6 TO 8 SERVINGS)

NOODLES & MUSHROOM MARINADE – MIX THESE IN A SMALL BOWL

HOW TO MAKE JAPCHAE

1. Place the beef strips into a medium bowl. Add the “beef marinade” and gently mix the sauce into the meat. Cover the bowl with food wrap and set it aside while you’re working on other ingredients. 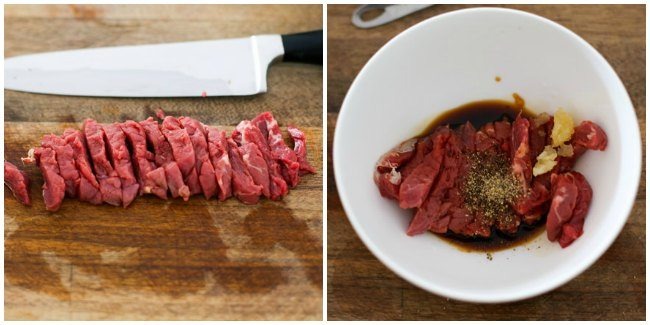 2. Get the rest of ingredients ready per below. 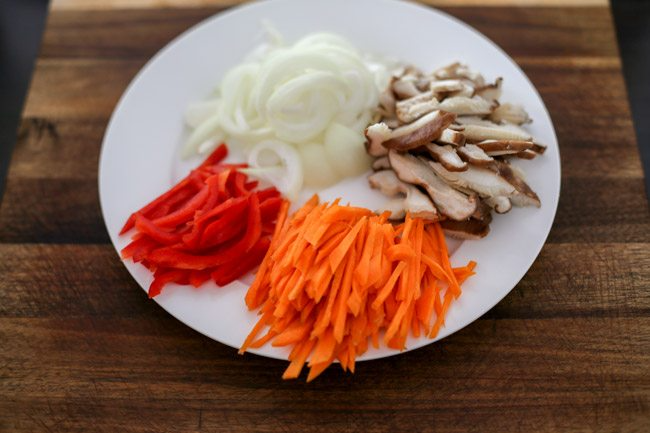 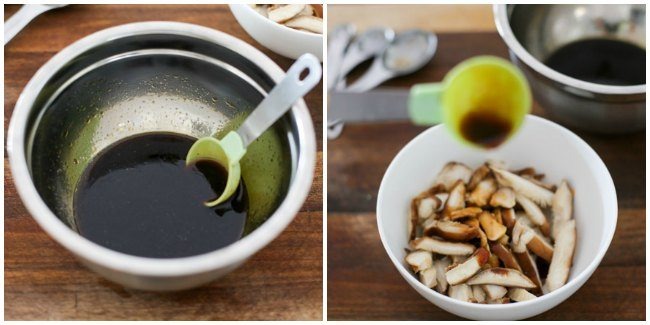 Add the “spinach seasoning” and mix them gently and evenly. Put it into a large mixing bowl where we will be adding the rest of the prepared ingredients in later. 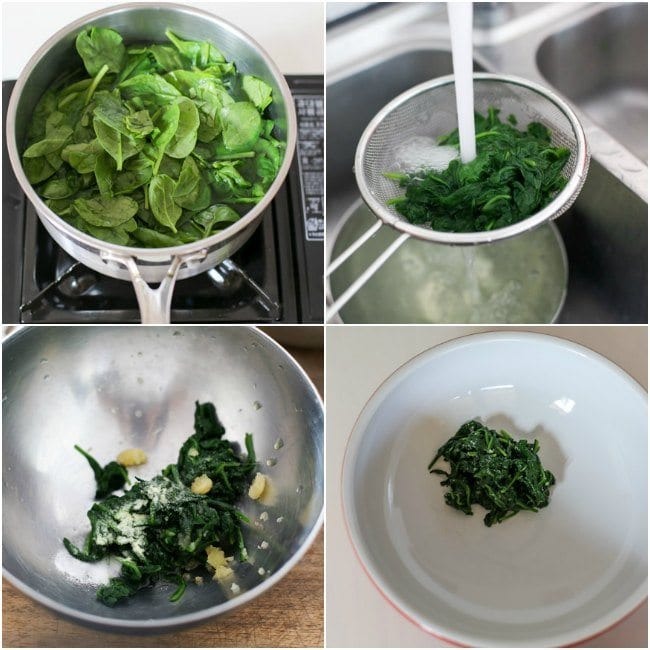 Cut the noodles with a pair of kitchen scissors a couple of times. (Between 15 to 20 cm / 6 to 8 inches length is good). Move the noodles into a mixing bowl and pour in the rest of the “noodles & mushroom marinade” mixture. Mix them well. Set it aside until you cook it (in about 10 mins). 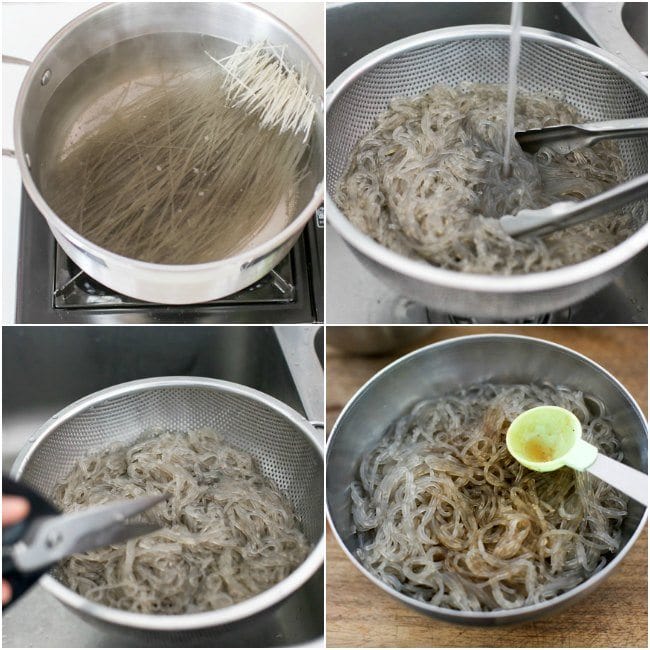 3. Start cooking the prepared ingredients per below. Follow the order if you can. We are cooking lighter color to darker color (to minimize the color transfer and avoid washing up in between) and will be using only one non-stick pan/skillet.

Once each step is completed, move them into the large mixing bowl (except for the first two – egg white and egg yolk), where we will be mixing all ingredients in before serving. 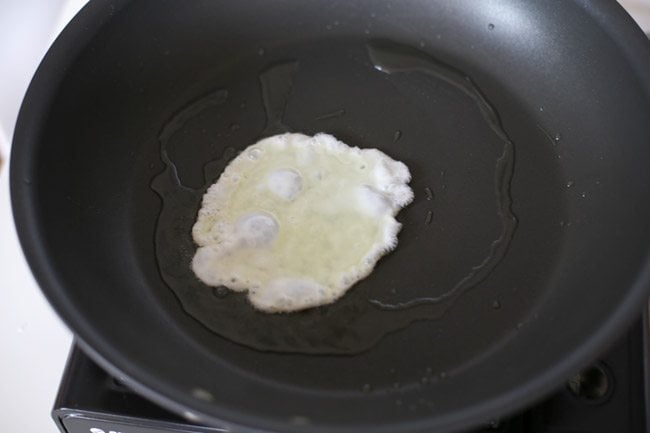 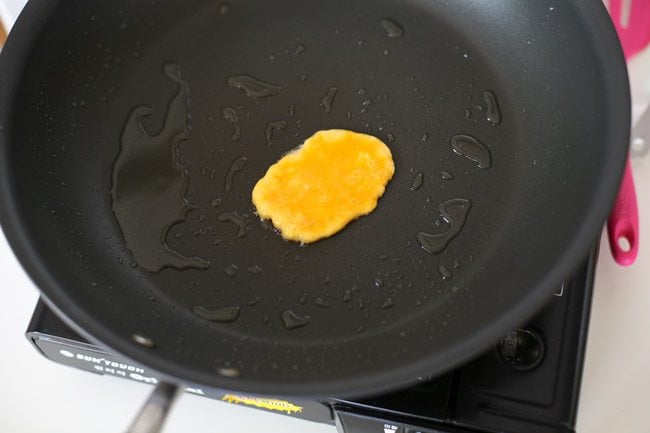 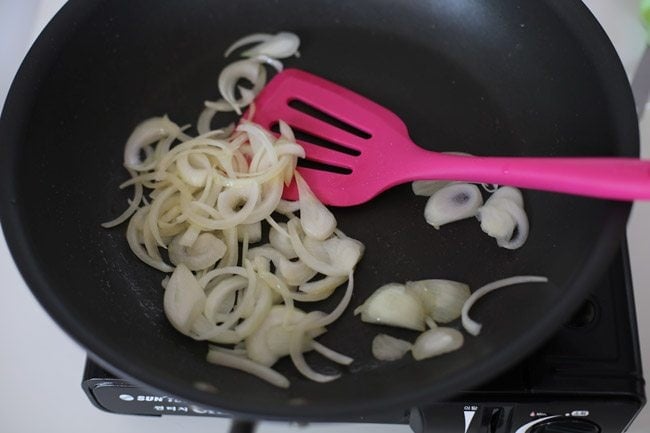 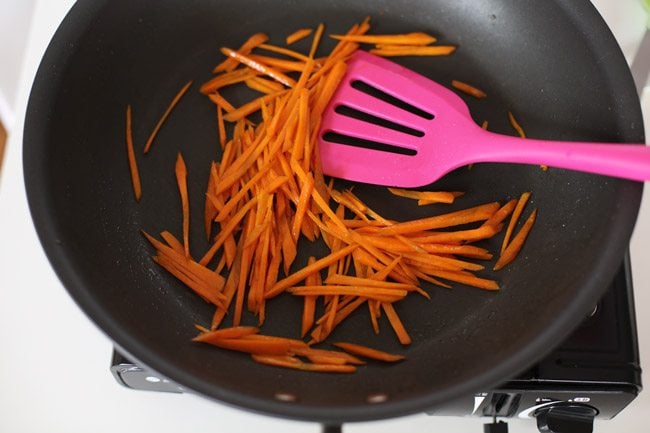 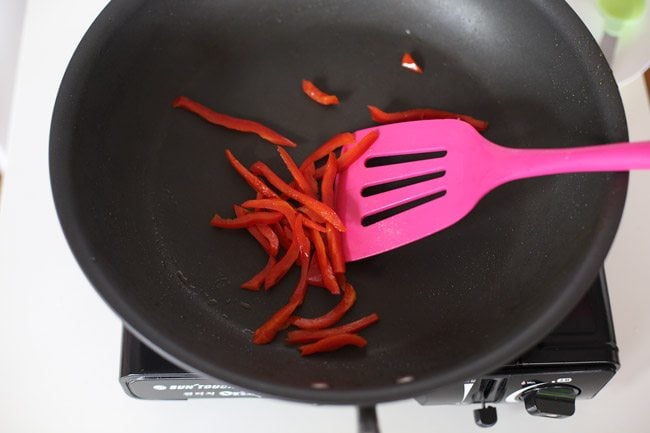 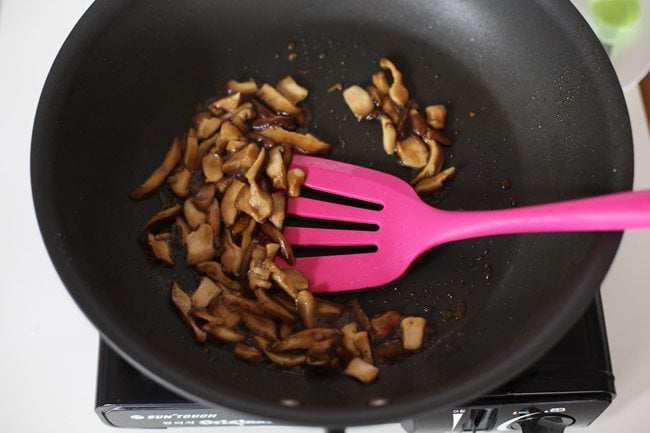 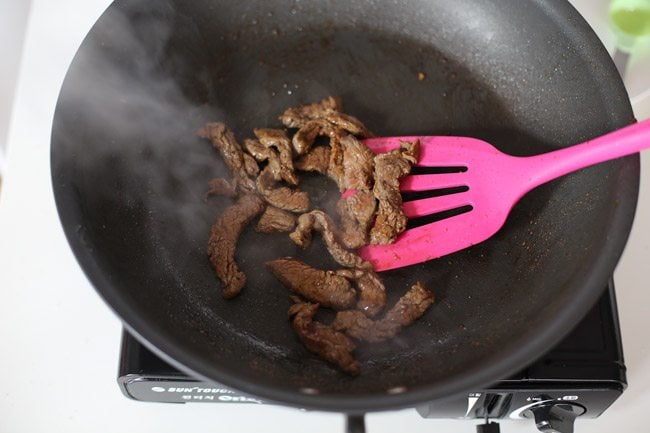 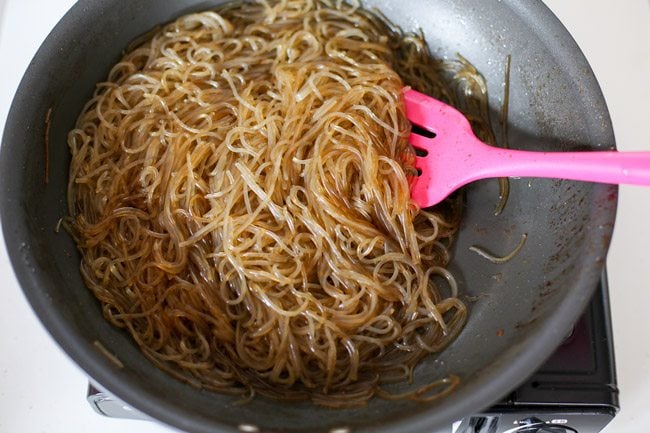 4. Thinly slice the egg white and egg yolk like match sticks. Add them into the large mixing bowl as used above. 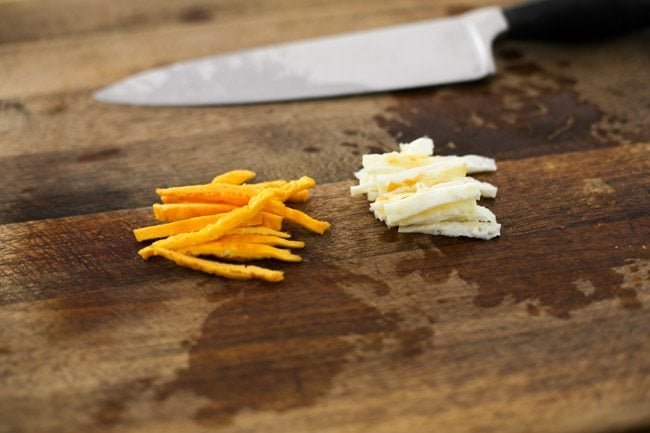 5. Add the rest of the “finishing touch” ingredients – sesame oil and sesame seeds into the large mixing bowl and gently mix them around with your hands.

(Watch your hands, as the ingredients, particularly the noodles might be still hot. You can also use a salad server to mix initially then mix with your hands once it cools down enough.) 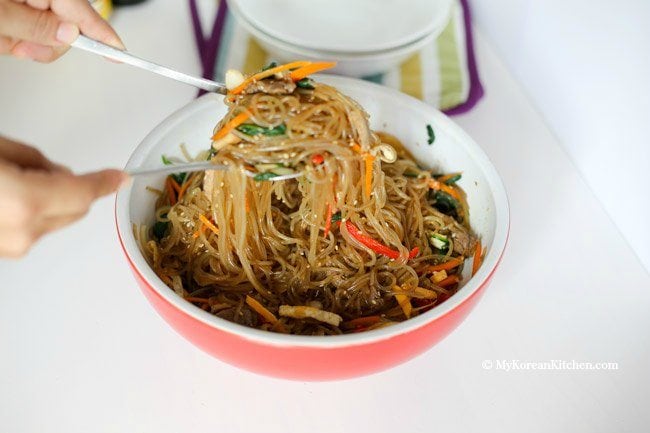 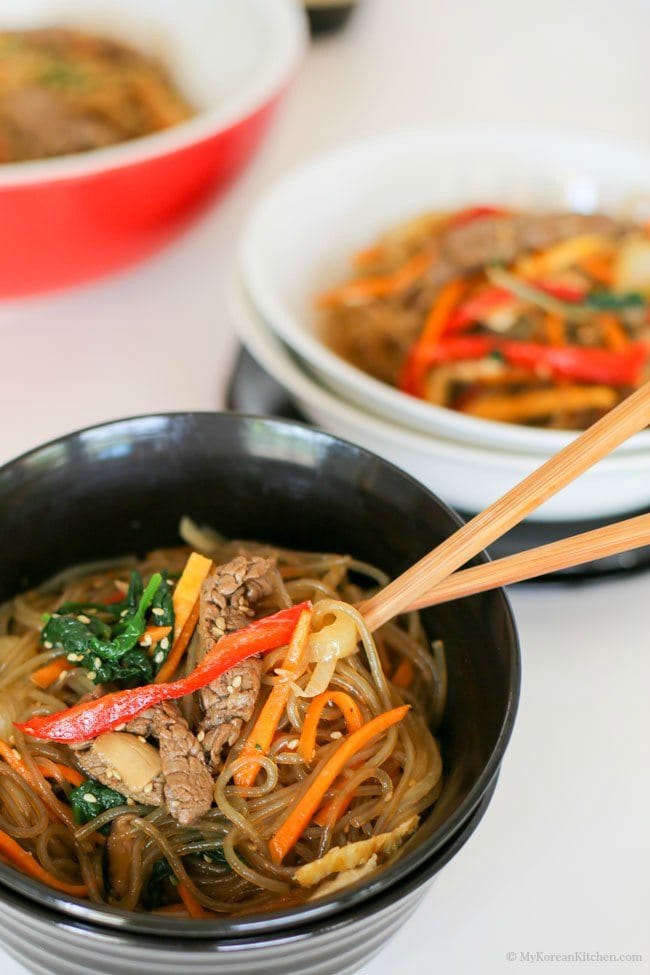